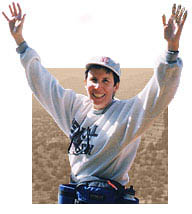 Arms raised in triumph, Diane Mathews is the Rocky of breast cancer. Like her movie counterpart, she went toe-to-toe with a heavyweight. Nearly 17 years later, she’s not only standing, but has made health her life's work. Her message is simple.

“You can’t just survive,” Diane says. “You have to thrive.” And she does, to say the least.

Diane, 45, is the Director of the Lowcountry Area Health Education Center in Varnville. She helps cancer survivors and spreads the word about early detection of the disease. She also educates community members and students about diseases and conditions that strike South Carolinians at unusually high rates.

Diane’s personal battle began in January 1993, when she was diagnosed with Stage IIB breast cancer. She had 18 positive lymph nodes and a small (2cm) tumor. Diane was all too familiar with the diagnosis, as cancer had claimed her mother and grandmother.

“I had a deep-seated idea, a perception, that cancer equals death,” she says. “However, it made me really angry when I was diagnosed. I basically decided that the pattern of people dying of cancer in my family was over. My grandmother had died, my mother had died, and I wasn’t going to die. And I can remember looking up to the sky and saying, ‘Well, you’ve taken two people, two women. No way.’ “At the time, Diane worked as a medical technologist who examined other people’s abnormal cells under her microscope. She couldn’t imagine her cells under someone else’s microscope. But, even as a trained scientist, she knows, “It’s not scientific when it’s you. It’s not empirical when it’s you.”

“You deny it, get angry, get sad, and then you fight.”

Diane had surgery, followed by a month of recovery. She then faced the difficult choice of traditional adjuvant chemotherapy, or high-dose chemotherapy, coupled with an autologous bone marrow transplant. She was on medical leave from her job. She walked her neighborhood. 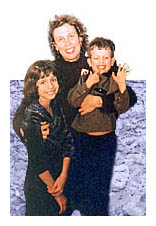 “God spoke to me,” she says. “There are a lot of stories out there of people who survived cancer and other things where that’s when they become very spiritual and in tune with what’s around them. I was reading the Bernie Siegel books, and in one of his books he talked about how intuitive we are and how different people have different signs about what’s going to happen when we go through the survival thing. He talked about a marathon, and how he had found 26 cents on the marathon, and he knew he was going to make 26 miles. So I was walking one day. I found a nickel. Then I walked further and found a penny. Bernie Siegel said this stuff might mean something. It didn’t mean anything to me then. So I can remember putting it on my dresser, and just saying, ‘Well, I’m just going to leave it there and think about it for a while, and come back to it and see if anything comes to me.’ I don’t know if it was in the middle of the night ... I thought … this is my sixth sense, and I had to follow that. Between that and prayers and everything else, I said, ‘I believe I’m interested in doing the transplant.’ Everything kind of came together.”

Diane talks about the seasons of cancer survival. She says:

That doesn’t always make sense to people. It makes sense to most survivors.”

Diane almost immediately began the process of “giving back” to the community. On moving to Charleston in late 1993, she worked to start a bone marrow transplant support group. “I learned a lot about how much energy it takes,” she says of starting the group. “The energy that you put into it is going to equal your product. And I’ve always kind of believed that for everything I do. Energy in … it’s so simple.” Diane also went back to school and got a Masters in Health Professions Education.

Since her diagnosis, Diane has traveled to Bulgaria, Greece, Ireland (twice), and many of the United States, including Hawaii (twice). As you can see from these pictures, Diane wraps her arms around a lot of people, including her nieces and nephews. Now her family and so many others know cancer in a different way.

Diane is living proof of her own words: “Survival isn’t enough, you have to thrive.” As Rocky might have said, “Yo, Diane. You did it.”