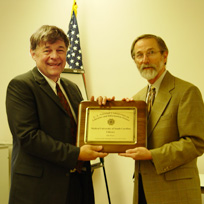 The Medical University of South Carolina Library has been selected to receive the 2004 NCLIS Blue Ribbon Consumer Health Information Recognition Award for Libraries for its Hands on Health-South Carolina project.

NCLIS, the US National Commission on Libraries and Information Science, has recognized outstanding libraries in 37 states for their contributions to health awareness and health education.Â  A special task force of NCLIS commissioners judged the programs and selected the winners on the basis of potential impact, innovativeness and replicability.

âThe purpose of the awards is to help increase awareness of healthy lifestyles,â said NCLIS Chair Beth Fitzsimmons.Â  âMillions of Americans are diagnosed each year with chronic diseases, which in many cases could have been avoided, had the individuals followed healthier lifestylesâ¦Libraries are a natural location for disseminating health information and the efforts of the Medical University of South Carolina Library, especially its Hands On Health-SC project, have been outstanding in carrying out this function.â

The Medical University of South Carolina Library has been awarded the Distinguished Library Award for 2004 by the Consortium of Southern Biomedical Libraries (CONBLS) in recognition of the success of Hands on Health-South Carolina, the libraryâs consumer health web site.

Hands on Health âpromotes healthier lifestyles for citizens and healthier communities in South Carolina,â¦addresses the health issues of particular importance to the people of South Carolina and provides reliable health information for all ages, education levels, and reading abilities.â

CONBLS is a professional organization of Biomedical Library Directors from the Southeastern United States. The award recognizes innovation, sustainability, and programs that contribute to the libraryâs mission of service to the academic institution or the community. It is presented at the annual meeting of the Southern Chapter of the Medical Library Association.

WatchfireÂ® WebXACT has found our site compliant with section 508 guidelines from the Architectural and Transportation Barriers Compliance Board (Access Board) of the U.S. Federal Government. The legislation referred to as "Section 508" is actually an amendment to the Workforce Rehabilitation Act of 1973. The amendment was signed into law by President Clinton on August 7, 1998. Section 508 requires that electronic and information technology that is developed or purchased by the Federal Government is accessible by people with disabilities.

The World Wide Web Health Awards is a program that recognizes the best health-related Web sites for consumers and professionals. The program is held twice a year â spring and fall â with the goal of providing a "seal of quality" for electronic health information.